Antibodies against spotted fever group Rickettsia sp., in horses of the colombian Orinoquia

Objective. It was determined the presence of antibodies against Rickettsia sp. of the spotted fever group, in horses of 8 municipalities of the Colombian Orinoquia. Matherials and methods. A cross-sectional study was conducted on 246 sera from apparently healthy horses and processed by the indirect immunofluorescence test (IFI). Results. General seropositivity was (2.85%; 7/246), while by municipalities the results were, Arauca (9.1%; 2/22), Saravena (5.6%; 1/18), San José del Guaviare (4.9%; 2/41), San Martín (3.8%; 1/26), Yopal (1.9%; 1/52). It was not identified the presence of antibodies in Puerto López (0/52), Puerto Gaitán (0/15) and Villavicencio (0/20). Four of the positive samples presented titles of 1:64, while the remaining 3 1:128. Conclusions. It shows the circulation of Rickettsia sp. of the Spotted Fever Group in horses in the region of the Colombian Orinoquia, suggesting the need for further studies to understand the ecoepidemiology of municipalities with presence of seropositive.

Bacteria of the Rickettsia spp. genus are intracellular microorganisms that principally infect endothelial cells in humans and cause acute febrile symptoms that can be deadly if not appropriately treated. Clinical signs produced by these bacteria are similar to those of other tropical diseases, principally from the hemorrhagic or icterohemorrhagic fever group, which in many cases inhibits a timely diagnosis (3).

Diseases caused by the Rickettsia genus occur worldwide and have been recognized for many years; presently they are considered to be either emergent or re-emergent diseases and, in humans, vary in terms of severity (4). In the majority of reported cases in different countries, a common factor relating to the occurrence of the disease is poverty and environmental transformation (5).

In Colombia, the name Tobia Fever comes from the name given to an outbreak that occurred between the years 1934-1936 in the village of Tobia, in the Nimaima municipality (Cundinamarca). In the outbreak, 62 of the 65 people infected (of different ages) died, which represents a 95% mortality rate (6). Following this event, the disease was not known to surface again until the 21st century, where other fatal cases appeared in Villeta, Cundinamarca in 2003 and 2004 (7), Necoclí, Antioquia in 2006 (8), Los Córdobas, Córdoba in 2007 (9) and Turbo, Antioquia in 2008 (10).

Different epidemiological studies confirm the importance of canines and horses as sentinels to indicate the circulation of Rickettsia sp. (11,12), especially horses, since they are one of the most important hosts for Amblyomma cajennense, (ticks that are the principal vector for RMSF in Central and South America). Horses can be infected and become a serological reactor, for which they become “evidence” of the circulation of the bacteria in the site of origin (13, 14).

The national program of epidemiological surveillance of febrile cases and dengue of the Ministry of Health, in samples from humans originating from Guaviare between the years 2001-2004, found the prevalence of antibodies (Ab), using R. rickettsii antigen, of (4.7%) (15). In the small town of Pachaquiaro near the municipality of Puerto López (Meta) the prevalence in humans was (59%), which was associated with the possible transmission of Rickettsia sp. by ectoparasites (16). Previous studies confirm the presence of the etiological agent in the region of Orinoquia, but at the same time show that there are very few prior studies done on this topic with domestic animals, which suggests the need for further studies in this area of knowledge.

The objective of this study was to determine the presence of antibodies against SFG Rickettsia sp. in horses from the 8 municipalities of the Orinoquia region of Colombia.

Type of study and samples. A descriptive cross-sectional study was made in 246 equine sera from 8 Orinoquia municipalities. The sera were part of the inventory of a bank of sera from the Laboratory of Breeding and Animal Genetics of the University of Los Llanos. The samples had been obtained from horses that were reportedly healthy between the months of July- August in the year 2013 and were maintained at a temperature of -70°C in a deep freezer (Revco®, Asheville, NC, USA). At the time of collecting the sera, information about age, sex, breed and Zootechnical activity was also gathered. 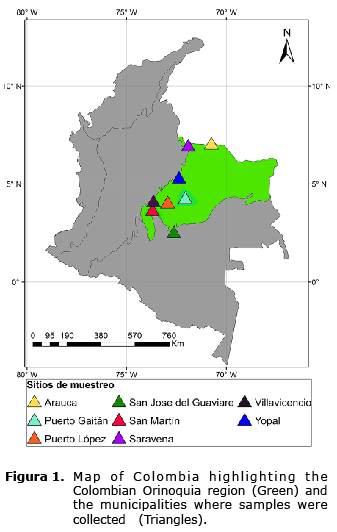 The Indirect Immunofluorescence Assay (IFA). The IFA technique was used, in which plates of 12 testing holes sensitized with antigen from R. Rickettsia Taiaçu strain were used along with positive and negative equine controls, kindly donated by Dr. Marcelo B. Labruna from the University of Sao Paulo, Saõ Paulo, Brasil. The testing holes were blocked with 20 µl of bovine serum albumin (BSA) to 1% in phosphate buffered saline (PBS), for 15 minutes. Subsequently, the BSA was removed and the testing plate was allowed to dry at room temperature. To each testing hole, 20 µl of test serum was added in a dilution of 1:64 in sample diluent (PBS with 1% BSA and 0.1% tween 20). A positive and negative equine control was included in each of the processed test plates. After incubation for 30 minutes at 37°C in a moist chamber, and four, five-minute washes in PBS and 1% Tween 20, 20 µl of conjugate were added (Anti-horse IgG A6917 – Siga, St Louis, USA), marked with fluorescein isothiocyanate (FITC), for each test hole, at a dilution of 1:400 in sample diluent, which was incubated for 30 minutes at 37°C in a moist chamber. Later, the four washes were repeated and they were mounted for reading. The seroreactivity was observed under a fluorescent microscope (Nikon EFD-3®, Tokio, Japan) at a 100X magnification and a 450-500 nm excitation. The samples were identified as positive or negative by comparing them with the controls. The positive sera at a dilution 1:64 were tittered in double dilutions until they became negative (14).

Statistical analysis. A descriptive analysis was made of the variables: origin, sex, breed, age, zootechnical activity and positivity to IFA. Possible associations between serological reactivity and independent variables were explored, using a Chi-square test and the obtained results, and were analyzed using the statistical analysis software SPSS (Statistical Package for the Social Sciences) Statistics 21.

A picture of the IFA positive test is found in figure 2. Seropositivity in relation to municipality (Figure3) was greatest in the municipalities of Arauca (9.1%), followed by Saravena (5.6%) and San José del Guaviare (4.9%). 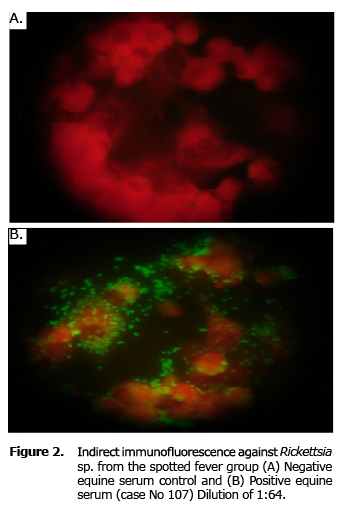 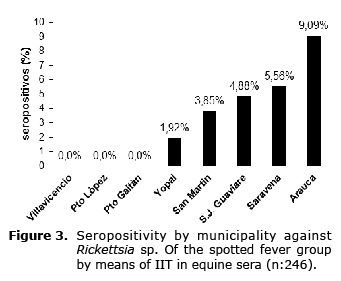 General seropositivity found in this study on SFG Rickettsia sp. (2.85%; 7/246) is low, nonetheless, it shows that horses have contact with Rickettsia genus bacteria, possibly transmitted through contact with Amblyomma cajennense ticks, which are its principle reservoir. The presence of these antibodies essentially corresponds to IgG, which suggests a longer infection period. It should be highlighted that the principal economic activity in all the municipalities where samples were taken is animal agriculture, which is affected, principally, at the end of the dry season (February-March) when animals have decreased immunity because of nutritional stress during this time period (17).

On the other hand, the use of a single equine sample as diagnostic proof impeded ability to determine if the infection was old or new, which suggests the need for further investigations that include the use of paired tests. The absence of statistical association between serological titers and age, sex, breed and zootechnical activity agrees with Anderson (18), which could suggest that these variables do not constitute as risk factors or, the absence of association could be the result of the type of focus group and the low number of positive-testing animals.

The results of this study also suggest the need for greater epidemiological surveillance in municipalities where the greatest seropositivity was found, such as Arauca (9.1%), Saravena (5.6%) and San José, Guaviare (4.9%), especially now that favorable epidemiological conditions, namely, high deforestation because of colonization and high levels of poverty, which can cause the disease to appear in humans.

General seropositivity (2.85%) is less than what was reported in horses in Villeta, Cundinamarca, which was (16.3%) considered an endemic area, where 3 species of ticks, A. cajennense, Rhipicephalus sanguineus and Dermacentor nitens, have been identified as having an impact on the transmission of Rickettsia rickettsii (25). These are the same species that have been identified in the Orinoquia region (26). “Clarifying from a public health perspective that A. cajennense is the species with the greatest potential of transmitting Rickettsia spp. to humans.”

Despite the fact that our study did not include other sentinel animals for R. rickettsii such as canines (Canis lupus familiaris) and capybaras (Hydrochaeris hydrochaeris) among others (27,28), the abundant wildlife in the surveyed municipalities suggests their inclusion in future studies. Although it is made evident that horses on their own have value as sentinels, given that they are principal hosts of A. cajennense, one of the principal vectors for R. rickettsii (13), suggests that the detection of antibodies in horses would be a good indicator for determining the circulation of R. rickettsii in areas where humans can be exposed to A. cajennense.

In a study in Brazil where, in addition to humans, horses and canines were sampled, a pattern was found of serological response characterized by a high frequency of positive horses, followed by dogs and a low frequency in humans (14). Contrarily, this pattern has not been reported in other studies (8). None the less, a high association between tick infestation among humans and the presence of A. cajennense in horses (29) has been displayed; such seems to be the case of high seropositivity in humans, found by Miranda et al (16).

Even without the use of sentinel animals, the high frequency of seropositivity in humans, such as found in the Puerto López vicinity (59%) (16), indicates the circulation of SFG Rickettsia sp., which requires special attention from municipal and departmental health authorities of the entire Orinoquia region.

Even though there have been no confirmed fatal cases in the region, possibly due to the fact it manifests similar clinical signs to other tropical diseases, the differential diagnosis of rickettsiosis should be obligatorily included in the case of undiagnosed febrile cases in the population. An additional aspect that could explain the absence of fatal cases is the circulation of diverse species of Rickettsia spp. of lesser virulence and which lend cross protection against the most virulent of the SFG which is R. rickettsii.

None the less, since the presence of antibodies against Rickettsia sp. from the SFG in horses were identified in this study, this information should be analyzed with care, given that it is difficult to predict that there will be cases in the near future in these municipalities. Recently, experimental studies showed that A. cajennense is scarcely efficient for maintaining R. rickettsii for successive tick generations over time (30). This possibility explains why there was not a high frequency of sporadic outbreaks over time in endemic zones. In the same way, cross- reactivity between other species of Rickettsia causes overestimation of seroprevalence when a single species is studied (8).

Finally, this study confirms the circulation of SFG Rickettsia sp. in the municipalities of the Orinoquia region, findings that adhere to those of Miranda et al (16) in the proximity of Puerto López and by the Ministry of Health in samples of the department of Guaviare (15), and suggests the need to maintain surveillance of possible undiagnosed febrile cases with the objective of avoiding fatalities. Without a doubt, the different ecological conditions of each municipality or each region can be a principle factor regulating the presence of bacteria and, consequentially, the presence of disease.