Proximate composition analysis posterior to the cryopreservation of Chaetoceros calcitrans

Objective. The effect of cryopreservation on the proximate composition of microalgae Chaetoceros calcitrans was evaluated. Materials and methods. C. calcitrans was cultured and cryopreserved using 5% (v/v) dimethylsulfoxide as cryoprotectant. The freezing was controlled at a rate of 3°C/min, up to -60°C and then the microalgae were immersed in liquid nitrogen (-196°C). After storage in liquid nitrogen, microalgae were rapidly thawed out and subcultured. The percentage of proteins, lipids and carbohydrates was analyzed using absorption spectrophotometry and the organic matter was studied by gravimetric analysis. Results. There was no significant variation between the proximate composition of C. calcitrans cryopreserved and the controls (p>0.05). Conclusions. Our results show that, despite low cell recovery after the preservation of this organism at low temperatures, there is no apparent loss of nutritional characteristics caused by the storing process at low temperatures.

Microalgae are a rich source of proteins, lipids and carbohydrates. They are used in aquaculture as food source in at least one stage of the life cycle of fish, mollusks and crustaceans. In hatcheries, sub-culture is generally used to maintain different strains of microalgae. This could potentially introduce biological contamination in the culture, subsequent loss of the strains, an increase of the farming costs, and at the same time, can affect the biochemical or genetic characteristics of the strains. Those problems can be tackled by maintaining collections of cryopreserved cultures, which aim to keep viable strains during long periods of time with minimal changes in their characteristics (1).

Microalgae cryopreservation is applied for various purposes. In cases where microalgae are used as nutritional sources, with low cell viability after cryopreservation as in the case of Chaetoceros calcitrans (viability <40%) (2), it is necessary to study whether the survivor cells have similar or different proximate composition to the one observed before freezing. Sanchez-Saavedra and Nuñez-Zarco (3) indicate that a low storage temperature of 4°C (during 1 to 6 weeks) influences cell density and proximal composition in cultures of the diatoms Navicula sp, N. incerta, N. thermalis and Nitzschia laevis. The purpose of this study was to analyze the proximate composition of the diatom C. calcitrans before and after one cycle of cryopreservation. C. calcitrans is an important source of omega 3 (C≥20) and polyunsaturated fatty acids (n-3 PUFA, mainly eicosapentaenoic acid: EPA, 20: 5 n-3). These nutrients make this microalga attractive for feeding filter-feeding mollusks, echinoderms, crustaceans and some zooplankton taxa (4).

Cultivation and Cryopreservation. Batch cultures of C. calcitrans using micro-filtered sterile sea water were grown. Culture conditions, cryopreservation protocol and viability estimations are broadly described in Salas-Leiva and Dupré (2). A brief description of the cryopreservartion protocol is presented here: dimethylsulfoxide (Me2SO, 10%) (Sigma, St. Louis, MO) was added to the cells at 4 and 25°C in complete darkness (1:1 proportion in mL). Each suspension (microalgae-cryoprotectant) was introduced into 0.5 mL straws (IMV France) and incubated during 15 or 45 min [treatments 6: OC-0445 and 18: OC-2515 in Salas-Leiva and Dupré (2)]. Straws were subsequently frozen to -60°C at a rate of 3°C/min and then stored in liquid nitrogen (-196°C). The viabilities of the treatments that had significant differences were 15.6±8.4% (OC-0445) and 31.7±7.7% (OC-2515). The recovered (thawed out treatments) and control cells (cells never cryopreserved from the same original strain used to cryopreserve) were inoculated into beakers of 250 mL and kept for 5 days. Then, an intermediate culture was grown in a volume of 1400 mL and five days later were transferred to bottles of 5 L. For conditions and culture media review Salas-Leiva and Dupré (2).

Proximate composition. Thorough nutrient analysis methods are complex and costly to implement; for instance gas or liquid chromatography can be used to observe small variations in the levels of fatty acids and amino acid profiles. This research selected a basic and simple methodology, with good sensitivity and low cost that can potentially be used in small laboratories or in variable ground conditions in producing farms.

The analysis was done for the recovered cells and the control. After six days of culture (stationary phase), a sample of 2 L of each of the three cultures was removed and centrifuged at 6000 r.p.m. for 6 min. The pellets were washed with isotonic ammonium formate (3.4%) to remove salts, and dried at 70°C until a constant weight was obtained. The ash-free dry weight was obtained by subjecting the sample to 500°C for 6 h. The percentage of proteins, lipids, carbohydrates, and organic matter of the three cultures was determined for C. calcitrans. Proximal analyses were performed using colorimetric techniques, with an absorption spectrophotometer Shimadsu (UV150-02). Proteins, lipids and carbohydrates were analyzed with techniques in references (5) to (7). Serum albumin, cholesterol and glycogen were used as standards (Sigma, St. Louis, MO). The organic matter in the samples was studied by gravimetric analyses according to Costard et al (8).

Statistical Analysis. The experimental design was a completely randomized block with one single factor and four levels. Three replicates were done and the result for each nutritional component was recorded as percentage of dry weight. For the analysis of variance, we first tested normality, homogeneity of variance and random data sequence with the Shapiro-Wilks, Barlett’s and runs tests respectively, and Tukey’s test for additivity. A one-way ANOVA for each nutrient was done separately. For all analyzes, we used SAS 9.3.1®.

The results indicated that the percentages of protein and lipid of the control were slightly greater than those of the thawed out treatments (Table 1). Carbohydrates in treatment OC-0445 were slightly higher than those in the control and treatment OC-2515. In the case of organic matter, both treatments had slightly higher values than the control (Table 1). All treatments, fulfilled the assumptions of normality, homogeneity of variance, data independence and additivity (p>0.05). ANOVA indicated that the proximate composition of microalgae subjected to cryopreservation (OC-0445 treatment and OC-2515) and the control was not significantly different (Table 2). 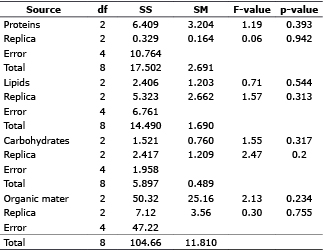 Under the conditions used in this experiment, viable cells of C. calcitrans seem to maintain their initial nutrient composition after one cycle of cryopreservation, despite a viability of approximately 15 to 35%. Something similar was reported by Nakanishi et al (9) in four types of microalgae, in those cells chlorophyll content did not show any significant change after being cryopreserved for 15 years. Among the few reports on the study of the proximate composition of microalgae after being cryopreserved, Esquivel et al (10) in Chaetoceros sp. found reduced percentages of protein, carbohydrate and lipids in cryopreserved microalgae respect to controls. The reduction in some components in frozen samples can be attributed to “cell leakage” which occurs at low temperatures (membrane damage causing loss of cell content).

Nuñes-Zarco y Sánchez-Saavedra (11) mentioned that refrigeration of benthic diatoms Navicula incerta and Amphiprora paludosa at 4°C causes small changes in the proximate composition (mainly lipids and organic matter). Subsequently Sanchez-Saavedra and Nuñez-Zarco (3) noted that storage at 4°C in darkness, causes an increase in protein content in Navicula sp, N. incerta and Nitzschia laevis, but an increase in the lipid content is only observed in N. incerta under those conditions. According to these researchers this change in the lipid content is consistent with that shown by plant cells after cooling at 5°C, where the lipid content typically increases at the cell membrane to prevent formation of intracellular ice. Proximal changes in composition after storage at low temperatures are a type of species-specific response. The above mentioned results are not fully comparable to our research because they applied different preservation procedures. Nonetheless, we can suggest that the microalgae in our study retained the ability to grow and synthesize the basic components of biomass in similar proportions of the original strain. Here we have to highlight that most of the chemical and metabolic reactions are reduced exponentially at low temperatures, and differences in cells stored at -20°C respect to those stored at -100°C are expected (i.e. the lower the storage temperature, the smaller the change occurring in the cells). This means that the use of temperatures below the eutectic point of the mixture (cells-cryoprotectant solution) prevents damage of the cell for long periods of storage (12).

According to Brown et al (13), diatoms generally present protein composition ranging from 30±10%, lipids between 14±5% and 7±3% carbohydrates. Our data fall within those ranges. The nutritional contents observed in our investigation are close to the ones reported for C. calcitrans, C. muelleri, C. gracilis and Chaetoceros sp. (14), and the slight observed differences can be due to several factors (i.e. photoperiod, culture media, harvesting stage, temperature, salinity, strain specificity) that affect the proximate composition (14).

In cases where cryopreservation is carried out with strains that have been previously cryopreserved (i.e. sequential cryopreservation), the storage technique may induce directional selection favoring those cells that are more adapted to counteract the effect of low temperatures (i.e. cells with a highly flexible cell wall, natural production of cryoprotectants, gene expression and protein accumulation associated with responses to low temperature (AFPs), or DNA methylation responses to protect against low temperatures)(15). This could be detected by the use of molecular tools such rtPCR analyzing transcription factors and/or molecular analysis of HSPs (heat shock proteins).

Finally, our research supports positively the idea that cryopreservation is an effective technique of preservation of microalgae while their nutritional characteristics is maintained during long periods of time.

The authors thank Mr. Raúl Vera for his support in the laboratory of Biochemistry at the Universidad Cátolica del Norte (Chile).