Objective. The aim of the present study was to determine the efficacy of Chloroquine (Cq), an antimalarial medicine, administered at a dose of 2.5 mg/kg, orally, during 5 consecutive days, in Sakiz and Merino lambs naturally infected with Giardia duodenalis. Materials and methods. To this extent weaned 10 weeks of aged lambs were enrolled and randomly assigned into two groups based on treatment (group C, n=18 lambs treated with Cq) and placebo (group P, n=8 untreated control animals). Diagnosis was based on detection of trophozoit and/or cysts on fecal flotation. Cyst count per gram feces (days 0, 3, 7 and 10) was analyzed among groups. Results. During the trial, regarding the efficacy of Cq on days 3., 7., and 10. There was significant (p<0.01) reduction in cyst excretion; whereas evaluation of mean geometric cyst excretion revealed 100% reduction. Conclusions. There was a very high (100%) reduction in cyst excretion in the Cq treatment group compared to the positive untreated control group on days 3, 7 and 10, resulting in a significant (p<0.001) reduction, making Cq, safety, and thus highly effective treatment option of lambs with naturally occuring giardiasis.

The genera Giardia has been described as an important enteropathogen in various species of domesticated animals and humans, and several researches in ruminants have been carried out in an attempt to detect prevalence rates in livestock (1,2). Moreover Giardia duodenalis (G. lamblia and G. intestinalis) has been emerged as a significant parasite in domestic ruminants in relation to high levels of infection. Reagarding latter animals, the typical feature of infection is a peak cyst shedding at between 5-10 weeks of age (3). Furthermore giardiasis has a significant pathogenic role in livestock with diarrhoea, weight loss, lethargy and poor condition as presenting clinical signs (4,5). Besides giardiasis in sheep, is of public health concern, in relation to contamination of surface and ground waters through pasture and naturally acquired episodes of contamination by water or food (4). In Turkey prevalence rates as 36.6% (6) and 48.48% (7) were reported previously.

Although not evidenced, sheep flocks are considered as a potential threat for contaminating water supplies (8). Small ruminants, i.e. sheep may be considered as reservoir for human infections (8,9). All infected animals with giardiasis might therefore be treated due to probable source of infection for humans or other animals (10).

Currently none of the drugs is licensed or FDA approved for the treatment of giardiasis in sheep. The traditional anti-Giardial treatment in sheep includes the usage of fenbendazole (10,11), albendazole (12), secnidazol (13,14) and paromomycin (15) resulting in a clinical benefit in treated lambs. Contrarily fenbendazole and albendazole need to be adminestered in multiple doses, besides paramomycin is expensive. Related literature on the efficacy of antigiardial treatment in sheep involves limited and aforementioned studies. Taking into account cases refractory to traditional treatment, there is still a need to establish reasonably priced and novel therapeutic protocols. Cq is a reasonably priced, actually cheap compound used as antimalarial (16,17), against Entamoeba histolytica (16) and in the control of some chronic inflammatory conditions (18), but its usage against giardiasis is still under investigation. The activity of Cq or other 4-aminoquinolines is related to their binding to haematin within the monomeric/dimeric forms, subsequnetly inhibition of haemozoin formation and resulting in parasite death(19). The effect of chloroquine against intestinal parasites has received less attention; besides it remains unclear how Cq treatment helps generate strong and durable immune response. Therefore the purpose of this study was to evaluate the efficacy of Cq in lambs naturally infected with G. duodenalis.

Animals and housing. 27 lambs at the age of 10 weeks were enrolled, in which they were group housed on Adnan Menderes University, Faculty of Veterinary, Research Farm. The herd was composed of Merino and Sakiz lambs. During the allocation period (10 days) all lambs were screened twice with a 10 days interval to confirm the presence/absence of G. duodenalis cysts in the faeces. Prior to trial all lambs were treated with toltrazuril (Cevazuril® Ceva−Vet, 20 mg/kg bodyweight) for preventing coccidiosis. Individual boxes were cleaned and disinfected with a commercially available quaternary ammonium product for prevention of environmental contamination. Strict preventive measures were taken against contamination between groups. Animals were fed with commerciallly available lamb flakes. Water and hay was provided ad libitum during the study period. All necessary ethical guidelines were taken into consideration for randomized enrollment into the groups. The study protocol was approved by the institutional laboratory animals ethics committee of Adnan Menderes University HADYEK (with no: 64583101/2015/088) and informed written consent was obtained from all of the lamb owners prior to enrolment of the animals participating in study.

Twenty-six Sakiz lambs at the age of 10 weeks, of both sexes, that tested microscopically positive for giardiasis, were allocated into two groups. Eighteen lambs were randomly assigned to the Cq treatment group (group C). The reamining lambs (n=8) were enrolled in positive control group (group P), receiving the latter drug (Kutlu tablet®, Keymen Ílaç San. ve Tic. Ltd.Şti. 250 mg) at a dosage of 2.5 mg/kg perorally for 5 consecutive days. Due to commercial value of the lambs and ethical concerns only a limited number of cases were enrolled as controls.

Study design. Fecal flotation and microscopic examination of fecal samples. Pretreatment day 0 (D0) was designed as the initial treatment of the trial. Collections from each lamb were obtained on 4 occasions and were designated either D0 (before treatment), D3, D7 and D10 after treatment. Fecal samples approximately weighing 5 g were collected on all occasions manually from the rectum of all lambs involved on each occasion and were submitted immediately to laboratory for fecal flotation. Fecal material was mixed through fifteen mL of ZnSO4 solution (33%) and strained onto centrifuge tubes. Afterwards sample was subjected to centrifuge at 880 x g for 5 minutes as described (20), and to those of similarly to what have been reported elsewhere (14). Following centrifugation, a limited portion of the fecal mixture was collected and emitted on a microscope slide containing Lugol iodine, which was covered by a slip. The slide was then microscopically examined under 40x power for detection of Giardia spp. cysts. The latter procedure was repeated for 2 times from different samples belonging to each lamb collected on day 0 by a single blinded researcher. An involvement criterion was mono infection with G. duodenalis, proved by microscopical fecal samples as reported previously (21).

Assessment of efficacy of treatment. Cq treatment efficacy in the present study was assessed by microscopic examination of fecal samples collected on D0, D3, D7 and D10 (after treatment completion) and measured based on the reduction in cyst excretion for treatment group in comparsion to the control group. The reduction in cyst excretion was calculated using the Henderson−Tilton formula, involving geometric mean cyst counts similar to those of Geurden et al (10):

The Henderson−Tilton formula is considered as the most appropriate method as described and used previously by Geurden et al (10).

Statistical analysis. The measurements for the number of oocytes were tabulated above the descriptive statistics. Summarized data were presented as geometric and arithmetic mean values. The parameters were not normally distributed after the normality tests and logarithmic transmissions. Then statistical analyses were done with non-parametric Mann-Whitney U test and probability (p<0.05) was considered to indicate a significant difference. Software package (SPSS ver. 22.0 for Windows - SPSS Inc., Chicago USA) were used for all tests.

Animal management and treatment applications. No observable and significant adverse reactions to Cq treatment were noticed in the present study. All lambs had clinical signs compatible with naturally occuring giardiasis, involving diarrhea. No coccidosis nor Cryptosporidium infections were found in any of the lambs enrolled during the study period.

Cyst excretion. The results of the cyst counts were presented in table 1. Throughout the study period, lambs in control group P remained positive, presenting cyst exceretion on day 10 (ranged 40-39.000) compared to the initial values (ranged 11000-560.000). On day 10, after Cq treatment, the percentage reduction in cyst excretion calculated based on geometric mean was very high as 100% on days, 3, 7, and 10. For group C geometric mean for cyst excretion was significantly decreased (p<0.001) on days 7 and 10 after treatment.

Table 1. The Giardia duodenalis cyst excretion in the control (Group P) and in the Cq treated (Group C) groups at each sampling day (before treatment [day 0] and D3, D7 and D10 after treatment): the geometric mean (geomean) (XG) and arithmetic mean (arith mean) were presented and the percentage reduction calculated based on geometric and arthmetic means. The values at day 0 were cyst excretion prior to treatment. 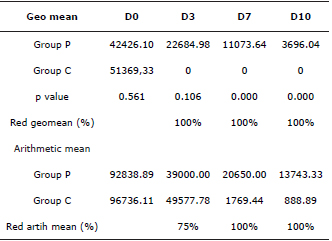 Overall, the efficacy of Cq was 100% on days 7 and 10, regardless of the use of arithmetic or geometric mean cyst counts for calculation (Table 1).

To the present authors’ knowledge the high efficacy of an oral treatment with Cq at 2.5 mg/kg against naturally occuring giardiasis in lambs has been demonstrated for the first time. In the present clinical trial, chloroquine was well tolerated, no side effects were evident, thus did not require treatment intervention or withdrawal. Available evidence suggested that Cq might be efficacious as 5-nitroimidazole compounds in the treatment of giardiasis in lambs. This may be briefly explained with previous studies. Cq has been detected to have antigiardial activity in−vitro (22,23). Gordts et al (22) tested 25 Giardia isolates and declared that more than a half of the Giardia isolates were very susceptible to Cq in-vitro. Similarly, Baveja et al (23) suggested the efficacy of Cq on in-vitro reducing ability against Giardia to attach and colonize.

In a comparative trial, 165 Cuban children with giardiasis were randomized to receive albendazole, Cq (10 mg/kg twice daily for 5 days) or tinidazole. Parasitological follow-up based on faecal samples collected 7 and 10 days after the completion of treatment revealed that tinidazole and Cq possessed similar efficacy (p>0.05), curing 91% and 86% of the children treated, respectively, and significantly (p<0.01) better than the albendazole, solely curing 62% of the children. In the latter study chloroquine appears to be a good alternative for the treatment of paediatric patients with giardiasis (24). Another trial comparing the efficacy and safety of chloroquine versus metronidazole in the treatment of children infected with G. duodenalis, faecal samples on days 3, 5 and 7 after treatment completion revealed that the frequency of cure was a little higher for Cg without statistical significance. The latter study suggested that Cq, as an excellent alternative treatment for 5 days, was as efficacious as the recommended treatment with metronidazole, the gold standard in the treatment of giardiasis, in children infected with G. duodenalis (25). The efficacy of Cq in sheep is comparable to those of aforementioned articles in humanbeing naturally infected with giardiasis. Similarly to what have been described above, Cq possessed a high efficacy in reduction of cyst excretion in contrast to the untreated control group in this study.

In the present study Cq treatment significantly reduced the cyst excretion calculated based on geometric or arithmetic means by 100% on days 7 and 10 after the start of the treatment, resulting in a significant reduction (p<0.001) in cyst excretion in chloroquine treatment group.

Given the efficacy of Cq (as it resulted in a significantly decreased cyst excretion) for treatment of naturally occuring giardiasis among Merino and Sakiz lambs involved in the present study, the usage of this of drug should be encouraged. The high cyst reducing activity of Cq against giardiasis may be of beneficial in a clinical setting where a specific diagnosis is impossible likewise livestock field condition. The case of availability of the latter inexpensive drug, the cost (only 0.85 dollars per a lamb for 5 days therapy) and the easily availability for market opportunity have been significant clues for usage of this antiparasitic drug against giardiasis in lambs.

8. Robertson LJ. Giardia and Cryptosporidium infections in sheep and goats: A review of the potential for transmission to humans via environmental contamination. Epidemiol Infect 2009; 137:913−921.

17. Pérez MA, Cortés LJ, Guerra AP, Knudson A, Usta C, Nicholls RS. Efficacy of the amodiaquine + sulfadoxine-pyrimethamine combination and of chloroquine for the treatment of malaria in Cárdoba, Colombia, 2006. Biomedica 2008; 28:148−159.