Objective. The aim of this study was to determine the presence of Bovine herpesvirus − 1 (BoHV-1) and Bovine herpesvirus 5 (BoHV-5) neutralizing antibodies in herds on the Colombian high plains and their correlation with the level of cross-protection against both herpesviruses. Materials and methods. This study was carried out on cattle farms located around the towns of Puerto Lápez and Puerto Gaitán in Colombia’s Meta department. Sampling was made by convenience. Twenty-three farms were involved in the study; 488 sera samples were taken by random sampling. Virus neutralization test were performed according to the protocols of the OIE. Each serum was evaluated independently for each virus, BoHV-1 and BoHV-5. Results. The serological test confirmed the presence of BoHV-1 and BoHV-5 infections in the Colombian bovine population in 100% and 73.9% respectively. However, cross-reaction for both viruses was not evident in all farms evaluated. Conclusions. Alpha-herpesviruses are amongst the most significant infectious agents affecting cattle. Bovine herpesvirus 1 (BoHV-1) is found throughout the whole world and is endemic in Colombian bovine population, whereas bovine herpesvirus 5 (BoHV-5) has limited geographical distribution, mainly being reported in South-America (Brazil and Argentina), and we also confirmed the presence of BoHV-5 in Colombia.

Viral diseases represent a serious threat for livestock systems in Colombia, with those produced by herpesviruses having a singular importance. The pathogenic effects of bovine herpesvirus type 1 (BoHV-1) and its consequences lead directly to great economic losses and have been referred to for a long time (1). The presence of bovine herpesvirus-5 (BoHV-5) and its consequences has been more recently shown, particularly in South American countries (1).

Both these herpesviruses belong to the family Herpesviridae, subfamily Alphaherpesvirinae, genus Varicellovirus (2,3). BoHV has a double-stranded DNA genome, 135 Kbp long for BoHV-1 and 137.8 Kbp for BoHV-5 (4). Both herpesviruses are antigenically and genetically related, showing 85% nucleotide and 82% amino acid sequence identity (5). The sequence differences between the two, however, could explain why both viruses differ regarding their neuroinvasive ability and neurovirulence (6). BoHV-1 has been associated with various clinical syndromes, such as respiratory (infectious bovine rhinotracheitis (IBR)) (7) and/or genital infections (infectious pustular vulvovaginitis-infectious pustular balanopostitis (IPV/IPB) (7), abortions (8), and, occasionally, encephalitis (9). The genital form (IPV/IPB) was reported for the first time in Colombia in cattle from the Colombian eastern plains and has become one of the diseases causing the most problems, with a high prevalence reached in Colombia’s main livestock regions (10). The IBR and IPV/IPB forms have been targeted by several sero-epidemiological studies due to their economic impact; this has been accompanied by isolates being taken from field strains from several areas of Colombia, such as the savannah around Bogotá (11), the eastern plains, and the departments of Cárdoba (12) and Antioquia (10), together with the molecular characterization of one these isolates.

BoHV-5 is a pathogen whose clinical manifestations are associated with meningoencephalitis, which induces high mortality rates (13) and is even considered as a major cause of lethal encephalitis in cattle (14). Due to genetic, antigenic, and structural similarities between both viruses, BoHV-5 was initially considered a neuropathogenic variant of BoHV-1, called BoHV 1, subtype 1.3 (4,9). However, later studies based on molecular analyses of the genome and reactivity to monoclonal antibodies tests showed that they are two different viruses (15). The International Committee on Taxonomy of Viruses (ICTV) thus classified it as a new virus in 1992, calling it BoHV-5 (16).

BoHV-5 was isolated for the first time in Australia in 1962 from an outbreak of encephalitis which caused a high rate of mortality in calves (17). It was then reported in Europe (18) and the USA (19). Regarding South America, it has been reported in Argentina (20,21), Brazil (3,22), and Uruguay (23). No reports of disease caused by BoHV-5 have been noted in Colombia; however, the first indications of its presence was shown in studies of tissue samples taken from dead animals having symptoms of nervous system disorders, from which the virus was detected by PCR (24). Later studies by Pedraza F et al (25), determined a sero-prevalence of 58.4% for this virus in herds from the eastern plains. Apart from the above reports, there is a lack of studies in Colombia dealing with the clinical and epidemiological situation, which needs to be analyzed, especially due to the presence of the virus in other countries of the region for more than a decade. It should be noted that determining BoHV-5 prevalence by serological methods is laborious, as both herpesviruses are antigenically very similar since they share common epitopes. Cross-reactivity has been observed for both viruses in vaccinated herds, as well as in cattle naturally infected with BoHV-1. The foregoing raises the question of whether there is a level of humoral cross-protection, which could lead to argumenting that there is a lower risk of BoHV-5 being present in regions where vaccination against BoHV-1 is routine.

The present study was thus aimed at determining the presence of neutralizing antibodies against BoHV-1 and BoHV-5, as well as determining the level of cross-immunity against both herpesviruses in farms on Colombia’s High Plains.

Geographic location and sampling. This study was carried out on cattle farms located near the towns of Puerto Lápez and Puerto Gaitán in the department of Meta in Colombia. The area is located at 149 meters above sea level and has an average temperature between 26°C and 29°C. As a discriminative element, it should be stated that none of the farms in the study reported a history of vaccination against BoHV-1. Sampling was made by convenience. Twenty-three farms were involved in the study; 488 sera samples were taken by random sampling, without discriminating race or gender. Sampling involved bleeding by puncturing the coccygeal vein using the Vacutainer system (Becton Dickinson, NJ, USA) and was carried out on animals older than one year old to avoid interference with maternal antibodies. The blood samples were centrifuged at 3.500 rpm for 10 minutes and the sera were stored at -20°C until being processed.

Viral seroneutralization test. Sera were initially inactivated at 56°C for 30 minutes; then diluted in two-fold dilutions (1/2 to 1/256) in MEM culture medium on 96-well cell culture plates for determining the highest sera dilution able to neutralize the virus. Each sera dilution was left in contact with 50μl of a constant concentration (100TCID50) (i.e. 50% infective dose in cell culture) of reference BoHV-1 (Colorado strain) and BoHV-5 (EVI88/95 strain); the latter was kindly donated by Dr. Fabricio Campos from the Universidade Federal do Rio Grande do Sul (UFRGS) in Brazil. Each serum was evaluated independently for each virus. The virus neutralizations were done in duplicate. The sera-virus mixture was incubated at 37°C for 24 hours in 5% CO2 and then a suspension of 50ul of MDBK cells at a concentration of 2x104 cells/well was added. It has been reported that a 24 hour incubation period may score up to 16 fold higher antibodies titers. The plates were then incubated at 37°C in 5% CO2 for 72 hours; this time was necessary to establish the sero-neutralizing titer by determining the characteristic alpha herpesvirus cytopathic effect. The results were considered positive when the neutralizing antibody titer was <2, whereas values <2 gave a negative neutralizing antibody titer. A separate well containing a mixture of sera and cells was used as control for each sample in order to eliminate any toxic effect by the sera; in addition, cell and virus controls were also used. A partial titer of 256 was done in order to determine neutralizing antibodies. 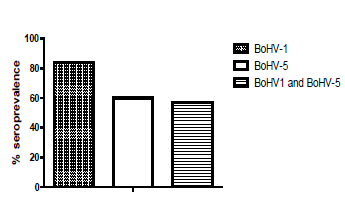 Figure 1. Sero-reactivity to bovine herpesviruses on all farms evaluated.

Table 1. Bovine herpesvirus 1 and 5 prevalence and average of titer antibodies on each farm evaluated. 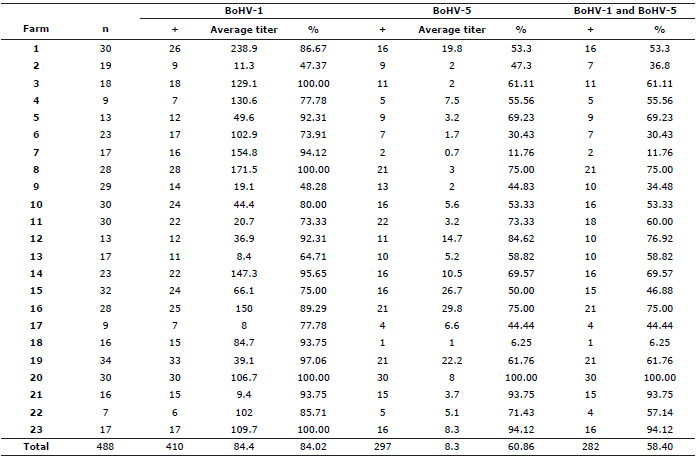 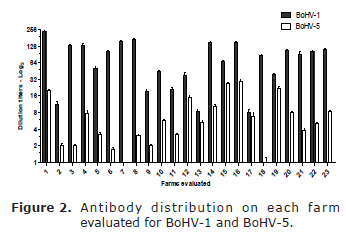 Figure 2. Antibody distribution on each farm evaluated for BoHV-1 and BoHV-5.

The aim of this research was to evaluate the occurrence of BoHV-1 and BoHV-5 in Colombia&sr s High Plains using serology. Our data confirmed that BoHV-1 and BoHV-5 are present in the country as previously reported (25). All studies conducted to date agree that in Colombia the prevalence of BoHV-5 is lower than BoHV-1. Prior studies carried out in Colombia have established 50 to 90% prevalence for BoHV-1. The present study has corroborated this situation in unvaccinated herds, thereby, demonstrating that the virus is in widespread circulation in Colombian cattle. Regarding BoHV-5, Pedraza et al. (25) carried out a study in the same region of Colombia (Puerto Gaitán, Meta) as that used in this study; they analyzed 156 sera samples taken from two cattle farms and found serological reactivity against both herpesviruses, with a sero-prevalence percentage of 70.5% for BoHV-1 and 58.4% for BoHV-5, as well as 56.4% cross-reactivity. Their results were similar to those found in the present study, which involved a greater amount of sera samples (488) and farms (23). Reactivity for both herpesviruses in the same sera was found at a similar percentage (57.7%). However, the seropositive percentage found here was higher, while the seronegativity percentage for both herpesviruses was lower (13%) than that reported by Pedraza et al, 2011 (26%). BoHV-5 specificity (antibodies exclusively against BoHV-5) reported in their study was 1% compared to 3% in our study. The current study not only validated the endemic nature of BoHV-1, but also highlighted the circulation of BoHV-5.

An important aspect to be considered is that a diagnosis for BoHV by sero-neutralization using just one type of virus (BoHV-1 or BoHV-5) leads to poor sensitivity; it is thus currently recommended to test for each type of virus independently, as shown by Varela et al (3) in 2009. The antibodies presented for each virus can thus be discriminated, determining which virus most affects a particular farm and thus establishing whether there is dual infection. Yet, using serological methods for differentiating between these two viruses is difficult, as they are very similar antigenically and share common epitopes; for this reason, we used a reference strain of BoHV-5 for reducing the possibility of non-specificity. However, the current study showed that not all farms with high antibody titers of BoHV-1 showed high titers for BoHV-5 and vice versa, suggesting that the level of humoral cross protection is limited.

It is clear from the foregoing that evaluating BoHV neutralizing antibodies led to establishing whether the animals had been exposed to the virus; such that if the neutralizing titers were high, it could have been inferred that the animals had been recently exposed or that they had an active infection. In addition, reactivity to both viruses, evaluated independently for each virus, indicated the presence of the two pathogens in herds without vaccination. The present study led to determining an active circulation of both viruses in the study area, since animals were found having titers higher than 1/64, with a seropositive percentage of 43.6% to BoHV-1 and 4.91% to BoHV-5. The study also showed reactivity for both herpesviruses in the same sera, therefore, cattle can be infected with more than one herpesvirus, as previously reported by Campos et al (1).

Although serological tests are important in determining the presence of antibodies against a given pathogen, the importance of using molecular tests such as PCR should be noted, as they can lead to the precise determination of viral types by detecting the viral genome through amplification of specific fragments of each virus.

In conclusion, the present study confirms BoHV-1 and BoHV-5 circulation in the areas evaluated, the latter virus was found in a greater proportion than in previous reports. The presence of antibodies for BoHV-5 in herds where titers for BoHV-1 are low suggest BoHV-5 circulation in this region of the country. Serological tests allow to establish an approach to determining the presence of the two viruses in a herd, however, the use of molecular techniques is recommended to differentiate specifically between the two herpesviruses.

This work was financed by the General Research Department (DGI) of the Universidad de los Llanos, project code CAMVZ-11/2010. We would like to thank Dr. Fabricio Campos from the Universidade Federal do Rio Grande do Sul (UFRGS), Brazil, for his collaboration.